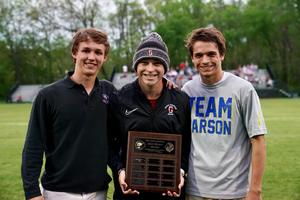 Carson Anderson was presented with the first Lion Heart Award named in his honor from CPA players at GCA. Click this post for full story.

Every Thursday morning at 6:30 a.m. the Grace Christian Academy boys’ soccer team gathers for devotion. One morning this fall, the team was rocked by the news that sophomore Carson Anderson had been diagnosed with cancer.

GCA coach David DeFatta was emotional remembering the morning. He said Anderson explained his Ewing Sarcoma diagnosis in his left foot, which had spread into his lungs, to his teammates and then made an announcement.

“He looked at the guys and he told them that he was going to beat it,” DeFatta said. “We had awesome time of prayer and the guys just rallied around him.

Fast forward to Tuesday night at GCA. Anderson isn’t playing, yet, and he just finished a five-day cancer treatment over the Easter weekend, but he’s on the sidelines like he has been all season. He actually played in two matches early before fracturing his right ankle on a freak play where an opponent rolled up on his leg unintentionally.

Through all this, Anderson has maintained a constant positivity. He’s a consistent supporter of his Lion teammates and a player-coach on the sidelines.

The CPA players noticed and wanted to create a new award to share between the two schools and honor Anderson. The sophomore was named the first Carson Anderson Lion Heart Award recipient Tuesday.

“I truly believe I don’t deserve it,” Anderson said Tuesday. “I have no words for this because I truly don't deserve this. I mean they're the ones that deserve it more than I do.

“It felt good, but it also felt in a way that you know, I was the one getting honored when it should have been them getting honored for their actions and for their dedication and their encouragement. But I mean, I was holding back tears.”

The award will be passed between the two schools, which both have Lions as a mascot and will be playing in the same region next season. Each year, the school with the award will present the plaque to the other and honor another student-athlete who shows the heart of a lion, like Anderson.

Proverbs 28:1 is engraved on the award as well. It reads: “The wicked run away when no is chasing them, but the godly are as bold as lion.”

“What an awesome thing for two schools to be brought together by,” DeFatta said, “but to just see Christ’s love through that to bring two teams together before a game and just do something like that. I mean, I was blown back by their players and I think it's a really great tradition that we can continue to keep going to the years.”

The special presentation took place before the varsity match at GCA. The visiting Lions went on to a 3-0 win, scoring twice in the first seven minutes on Sam Ellis tallies in a contest much closer than the score indicated. The match evened out the rest of the way with CPA keeper Brown Meyers turning away several huge GCA opportunities.

On the heels of another CPA tally which provided the final score, GCA sophomore Kytn Wolf stopped a CPA penalty kick in the 57th minute. The home-standing Lions used some of that momentum to earn a couple shots and 10 minutes later, Meyers turned away a Malachi Jones rocket from in front of the goal to swipe another scoring opportunity.

GCA was held scoreless for the first time this season as CPA earned a fifth shutout.

CPA coach Tom Gerlach said his team completely re-tooled their lineup to try and slow down the young, dynamic players for GCA, led by Malachi and Levi Jones and Shewitt Worton.

“It’s really going to be a huge thing to have them in our district,” Gerlach said. “I love the fact that you know, they call this the ‘Lion Derby,’ which I think is awesome. We're able to you know have that camaraderie, but also when the game was on, it was gloves are off and we're going to battle it out.”

“I mean, when we’re not playing school ball, a lot of us are playing travel both with and against each other and it adds that relationship and that bond,” Anderson said. “It makes these games a whole more special, no matter the victor, no matter the loser. It just brings a little sense of brotherhood together.”

CPA, which also won against Providence Christian Academy Wednesday, improved to 11-1-0 overall. They close out the regular season at Whitehouse on May 2.