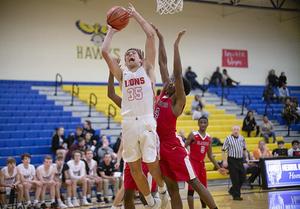 As hard as it is to believe, Grace Christian Academy graduate and former four-sport athlete Cole Scott used to not enjoy sports.

That’s right. He went from no sports to four sports.

“The funny thing is, I hated athletics when I was little,” he said. “I couldn’t do it…my mom actually got me into it when I started middle school. She got me into basketball big time, and that was my real passion for a long time.

Before graduating in May, Scott was GCA’s renaissance man, one who sported football, basketball, track and tennis jerseys for the Lions and held a 3.8 GPA in the classroom toward the end of his time in the classroom.

He was also the school’s second 1,000-point scorer in boys basketball behind points maven Mason McKnatt and one of its most decorated athletes.

He recently finished second in this year’s state decathlon for the Division I Small Class level and earned a medal in the pole vault at Spring Fling.

So how did he manage to balance so many sports at once, you might ask.

“That’s a good question,” Scott said with a laugh. “Coming into junior and senior year doing four sports…it just seemed clear to me that that’s what I wanted to do.

“Football really helped me get more aggressive, and it actually does translate into basketball, which helped me.”

When you talk to Scott, it’s clear he’s wise beyond his year. He continued his reasoning for participating in so many athletics with insight that doesn’t always seem it might come from a rising college freshman.

“Throughout all of them, the main thing is being able to give it your all every single day, like no matter if it’s a practice or a game, whatever you’re doing,” he said.

“Being able to give it 100% of your focus is important, and taking it each step at a time is really important. I try not to worry about the future because you can miss out on the present when you do that.”

Growing at GCA on the court

Scott says the school has helped him grow tremendously in his high school years.

“I loved the environment,” he said. “It just seemed like God was calling me there, and he really has blessed my time here. It’s just felt like an amazing gift.”

His transition mirrored the one head basketball coach Len McKnatt made in 2014 after leading the BGA Wildcats to a state title in boys basketball. McKnatt now serves as the boys hoops coach and athletic director for the Lions.

Scott credits McKnatt for more than what he’s been given

“Basketball has always been my thing, and Coach McKnatt has been a great leader for me,” he said. “He was the one who really started to point me to Christ, even when I was young, and he’s been a great mentor for me, and [has] taught me how to have great work ethic.

“Getting to play for him these four years of high school, that’s been such a blessing.”

McKnatt always writes the word “team” in bold letters. You can see it in his social media posts and in his box scores sent out to media affiliates in town. You can hear the emphasis on the word when you talk with him.

The mentality of “TEAM” flows through communication with both guys, and the coach said feels Scott embodies that idea to a tee.

“Everything Cole does he does with excellence,” he said of his former player.

“The best compliment you can give someone is that you hope your son turns like Cole, he is that type of kid. He attacks his spiritual life, academics, and athletics with power, love, and self discipline. He gives his TEAMmates everything he has everyday.

“He has made a huge positive impact in every phase of school life during his time here at Grace Christian Academy. He will be sorely missed.”

That attitude shows when Scott talks about his final season on the hardwood. After winning a district championship in 2018, the Lions didn’t match that achievement this winter.

The graduated senior would be the first person to tell you expectations weren’t met, but he looks beyond the record for takeaways.

“This season, we didn’t go as deep [in the playoffs] as I would have liked to, but it was still amazing,” Scott said. “I couldn’t have asked for a better team to play with and better guys to help pick each other up.”

You hear a lot about the communal aspect at GCA from folks when you talk to them. Scott cited how special the atmosphere can be.

“We’re all one family, and there’s no division to freshman to seniors,” he said. “Everyone’s lifting each other up, and everyone’s encouraging each other. That’s been really unique to see, and I feel like God has really blessed that.”

He specifically mentioned how the school surrounded and prayed for sophomore Carson Anderson and his family as the former went through treatment for bone cancer this school year.

“We were able to support him and his family through that hard time,” he said.

Growing on the gridiron

It’s ironic to think about Scott, one of the Home Page’s 2018 All-Williamson County talents at wide receiver, starting his football career on the offensive line.

Really, he says he really didn’t have any interest in playing football whatsoever before sophomore season.

It’s a fascinating path for one to take to the gridiron, and like with all of his efforts at GCA, Scott made the most of it.

“I feel like it was a great opportunity,” he said.

Now, any young athlete’s mettle could be tested in a nearly-winless season. The Lions went 1-8 last fall, but you won’t hear Scott complain about the outcome.

“We had a young team this year in football, and we didn’t get many wins, but being able to lead those freshman, and just guide them, and being able to see the fruits as the years go on is going to be such a gift,” he said.

“I feel like that’s what God called me to do this year, and he really did bless us through it.”

He cites head football coach Rusty Smith, an NFL veteran who spent a few seasons in the Tennessee Titans’ quarterback room, as another key influence in his GCA journey.

“He really showed me what it is to be a man of God…[I was] able to see that played out through his life…[it] has really helped to guide my life and lead me through times when I’ve struggled,” he said.

Smith hails Scott like McKnatt does as a leader on and off the field.

“The three best words to describe Cole Scott on the football field are versatile, selfless, and tough,” Smith said.

“He was also incredibly tough. He routinely played through pain because he didn’t want to let his team down. We will not be able to replace him, and he will be greatly missed.”

“That one game we won, it was something I’ll never forget,” Scott said.

He sets the scene as such: it was a home Senior Night game against district foe Mt. Pleasant, the second-best in the standings.

“No one expected us to win,” he remembered.

The team resolved to give it the best effort it could and leave the rest to the man upstairs.

“We came out, and we were on fire from the start,” he said. “I think I ran for 275 yards that game. That was a pretty cool opportunity.”

At the end of the game, it was tied, Scott recalls, and one play separated the Lions from overtime. A Hail Mary pass thrown Scott’s way to end it didn’t go as planned as he dropped the pass.

“I was so let down and frustrated with myself,” Scott said.

But, in overtime, the Lions would get that score needed to win the game. All they had to do was stop Mt. Pleasant from evening the scoreboard once more.

The opponent got close, two yards away from making it that much harder for GCA to get its first win, with one shot to score. Scott remembers being in for the big stop and having one of the freshmen, a group Scott had pledged to mentor, look over to him and offer a promise.

“One of the freshmen specifically looked at me and said, ‘we’re going to fight for you,’” he remembers.

Promise fulfilled, as GCA got the stop, and won the game.

“It felt like it was from a movie,” Scott said. “We were really the underdogs…that was something that will stay with me the rest of my life.”

Looking Back and Looking Ahead

It was last fall when Scott began to realize that his time at GCA was running up. High school only goes four years, after all, and senior season holds many meanings.

“It really didn’t hit me until the end of football season that this was going to be the last time ever to step on the football field,” he said. “It just was going to be a different experience once I moved on to college.

“Sure, you can still play sports, but it’s not competitive, and you don’t have the same bond with those people you’re playing with because you’re fighting for each other. That was very difficult for me. It was something I had to overcome.

Scott said he looks back on his athletic career as one that he gave his all in, and one he’ll remember for the rest of his life.

The senior says he plans on attending Lipscomb University, his mom’s alma mater, in the fall, and may join the school’s track and field team. He received offers to play football at the next level, but opted to pass those by with concerns for his knee.

One thing high school seniors are sometimes asked to think of as graduation looms is what they’d tell their younger selves. If you were meeting your freshman counterpart, what words of wisdom would you share?

For Scott, they rotate around goals.

“No matter what you’re doing, if you really dedicate yourself to it, and really have your mind set on a goal that’s worthy and you have people behind you who are supporting you in that goal, then it’s something worth fighting for, and that you should keep going with that.

“No matter what happens, don’t let people hinder you from that, and always glorify God through it all because, really, he’s the one who gave you the opportunity to do it all.”