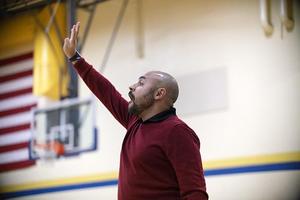 Coach McLeod just lead his team to an accomplished 2018-2019 season. The team finished 23-5 overall with a perfect 10-0 record in district 7-A competition and a seven-game win streak in the first half of the season before Christmas break.

The team doubles that effort in the second half of the season with a 14-game win streak. The team then followed up with a district tournament championship, and a trip to the region semifinals.

How has your programs the impacted the GCA community (students, fans, etc.)?

TM: I think over the last couple of years the athletics at GCA have really continued to grow both on and off the courts and fields. What I mean by that is the performance on the court and/or field has improved because of the buy in from the students to want to be competitive and to want to do it in the right way.

And off the field the GCA community, parents, fans, administration  etc. have really been there to jump in and help with whatever is needed to help our programs. Our Athletic Director Len McKnatt does an incredible job of leading by example and helping all of our programs continue to grow. He’s a servant-leader who is always there for us.

I have a two-part question. Can you share the dynamics of how you and your assistant coaches manage your team? How did you implement a winners mentality in your team?

TM: We try to manage our team by building a culture that seeks God first and through instilling confidence in all of our players. It’s amazing how far a little confidence can go. We let them know that everyone is important and everyone has a role. We use the term “ONE” for our team. It means Only Need Everyone. No matter how big or small it is, everyone has a role.

Implementing a winning mentality was something that took some time. My first year at GCA we kind of struggled down the stretch of a game early in the season and just hung on to win. I remember being frustrated about us almost throwing the game away. Someone came up to me after the game and said “Coach, they aren’t used to being in those situations. They aren’t used to having a lead at the end of the game.”

That really stuck with me and helped me to realize how important it was as a staff to really try and continue to instill confidence in these girls and teach them to play with a lead. Once they learned to do that it was huge for our team these past two seasons; all of the credit to the girls for what they’ve done the last two years winning back-to-back district championships. We know the new district this upcoming year will be tough, but we hope to continue to grow as a team on and off the court and to be able to compete in the new district.

How do you prepare your student-athletes for the next level in their life? College, working world, etc.?

TM: First and foremost we want to remind them to always put God first in everything they do. If they do that they will be prepared for anything life, school, or anything else throws at them. We try to use every situation as a learning experience. No matter the sport and no matter the level every team faces some type of adversity or opposition at some point.

We want to take those moments and apply them to life outside of the basketball court. There was a practice this past season where we talked about reacting to tough situations, the easy thing for many to do is to just give up. We encouraged them to not just give up; there are going to be tough times in high school, in college, at work, in their future marriages and as future parents. By seeking God first they’ll always have somebody by their side to help them walk through those challenges.

Can you share some out of the sport successes of your students/athletes (educational, community involvement, etc.)?

TM: The last two years our school has sent four girls to what is called Girls State at Lipscomb University. Three of those four girls have been basketball players (Anna Kate Bechman, Audrey Sanders and Alex Armstrong). Female leaders from all over the state are selected to represent their schools at this. We’ve been very proud to have representation at the event. We’ve had several players go on missions trips and our team has a whole has a very high GPA.