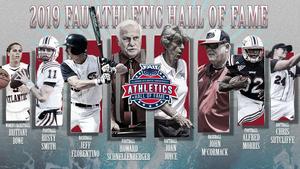 Click this post to read the excerpt on Coach Smith from the article on FAUSports.com. We are proud to have him in our GCA family!
BOCA RATON, Fla. – Eight Florida Atlantic University legends representing four teams have been selected for induction into the FAU Athletics Hall of Fame Class of 2019. Three coaches and five former student-athletes comprise those selected to be inducted into FAU's Athletic Hall of Fame. Induction ceremonies are slated for Friday, Oct. 11, and the class will be honored at FAU's football game against Middle Tennessee on Saturday, Oct. 12.

"This is a tremendous Hall of Fame Class," said FAU vice president and director of athletics Brian White. "The success of these individuals laid the foundation for all that we do as a department today. Their hard work, dedication and determination to make FAU Athletics great are commendable and we are proud to honor and celebrate them this fall."
Rusty Smith (2006-10) – Smith became Florida Atlantic football's first player selected in the National Football League Draft in 2010 following a standout career that featured two bowl victories and a Sun Belt Conference title. The quarterback finished his career with the school record in nearly every passing category. He helped lead the 2007 team to a Sun Belt Conference title with a road win at Troy. He then led FAU to a victory over Memphis in the R+L Carriers New Orleans Bowl. One year later, in 2008, he guided the team to a win over Central Michigan in the Motor City Bowl. In both bowls he earned honors, as Most Valuable Player in the New Orleans Bowl and Offensive MVP for the Motor City Bowl. Smith threw 76 touchdowns and threw for 10,112 yards in his career (2006-09). He played for the Tennessee Titans and following his professional football retirement, became a high school football coach.
https://fausports.com/news/2019/7/1/baseball-eight-fau-legends-selected-for-the-2019-fau-athletics-hall-of-fame-class.aspx Source: FAUSports.com