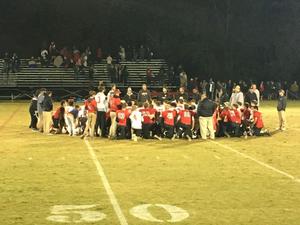 Article in Williamson Homepage conveys the heart of GCA.

Read the rest of the article at WilliamsonHomepage.com by clicking on this post.

You could barely find a seat at Grace Christian Academy last Friday night for its Homecoming night.

Even when the Lions went down by about 30 points at halftime, nobody really left.

The student section, decked out in patriotic apparel, cheered on throughout the continuously-chilly night for their Lions.

After the game, the crowd applauded GCA for the effort, despite the final score being 60-22 in favor of the visiting Middle Tennessee Christian School.

Both teams gathered at midfield for a prayer as folks began to clear the stands.

It's just hard to tell when you go to GCA what the final score is by the atmosphere sometimes. They always seem to be supportive, even in the losses.

Nobody ever seems to lose at a GCA game, even when they do.

"This place is very special to me and my family," GCA head football coach Rusty Smith said after the game.

The "special place" idea is one you hear a lot at from people around GCA, and it's typically told to you right off the bat and unprompted.

You sense that when you're on the campus. Their games are always well-attended by fans like it's a small-town community event, and no matter if you're wearing a GCA or opposing jersey, you're welcomed like a guest.

In any given corner of GCA, you can find someone serving someone else.

Smith, a former NFL quarterback and Tennessee Titan, is not bashful in saying how much the school means to him.

"This place has changed my life, and when I got done playing, I knew I wanted to coach high school football. I knew that. I knew that was God's calling in my life. I knew that. But when I came here, I came to be a football coach. But God has revealed to me, through this place, that I am called to guide boys along the path of adolescent malehood onto the road of genuine manhood."

"I can do that in any kind of way. Football is a merely tool that He has given me, and this place, with its community and its family atmosphere and its love for each other...it's special. I love it. I love this place."

The Lions football team is currently without a win, with only two games left to earn that elusive first victory. The team is in the midst of a switch to D-II competition, making it that much harder to succeed on the scoreboard.

But Smith says he still feels good can from a season like this, maybe even ultimate good.

"God can teach you anything in any moment," Smith said. "A lot of these kids don't know how to lose.

"It is our job to do what he has called us to do, no matter the circumstances, and there are plenty of life lessons that we can learn through this season."

Nobody wants to lose a game, mainly the head coach. But Smith sees his Lions as still learning lessons, the types of lessons that seem to permeate every corner of GCA.

"[It's] not the wins and losses, not the state championship rings, not the playoff berths. It's, 20 years from now, what are these boys doing? Are they Godly men? If so, then we did something right."

Building character and community among your athletes and students, in and of itself, can be a most wonderful victory.

If that's the approach, then there will never be a loss on GCA's schedule, not really.