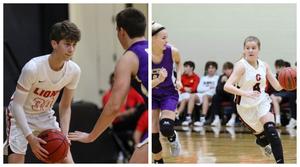 It's been a year of adjustments for Grace Christian Academy athletics.

Not only are GCA teams not able to compete at the moment due to the ongoing coronavirus halt on sporting events, they've been in a year of transition jumping from Class A to D-II competition.

Some sports, like soccer and baseball, won't be hard adjustments for the school, with standards of success in place in Class A competition.

The boys soccer team won a state title last year, after all, and has defeated a school like Brentwood Academy in the past. The girls soccer and baseball teams also made their respective state tournaments in 2019.

Football is on its own learning curve, with time needed to manage to the sizable gap between Class A and D-II competition on the gridiron.

Basketball, on the other hand, is a bit in the middle, and a decent barometer for how the school is adjusting overall.

The girls team had more of an advantage going in, with a District 7 title and region semifinal appearance under its belt in 2019.

Guard Anna Smith is one of the better players in the county, and the team also had some stalwart senior leadership in place from Audrey Sanders and Raychel Calvert.

"It's been fun," Lady Lions head coach Tony McLeod said of adjusting to D-II competition. "It's definitely tougher, especially basketball-wise. You've got to prepare every night in this district. You've got to be ready. You've got some of the best coaches in the state around here....it's been fun going against people I've looked up to in the coaching world for years."

For Smith, the step up in competition was noticeable from the get-go.

"When we started playing the big teams that have many, many, many more kids than us, at their places, we were like, 'Woah, this is different,'" Smith said.

McLeod mentioned two wins against a D-II team highlighted how different this season was from any other.

"Those two wins that we got let us know that we've kind of arrived," McLeod said. "We are here, and we've got a long way to go to get to the top. But the fact that we're even battling and we're in some of these games...we're improving day-by-day. I'm just proud of the battle we've shown every night."

Smith signals winning against a team like BGA as pivotal for the program.

"It's been harder [in D-II], but I feel like it's been more rewarding," Smith said. "We've won big games, like BGA, Senior Night at their place, overtime...it's been a lot more rewarding...we've come together more, I feel like, through it all."

Though finishing with an overall winning record this past season, GCA wasn't able to advance in the district tournament, falling to MTCS in the District 3 quarterfinals.

"We respect those [District 7-A] teams, but if we played well, we usually came out on top in that district...in this new district, there's no nights off," McLeod said. "No matter who you're playing, you've got to come ready. And I think we learned that lesson early."

Smith credits her coach in helping the team be ready for the next level.

"He makes sure we stay confident in ourselves and not worry about the opponent, but just worry about how we play," Smith said.

She also shared her optimism for the outlook of the school.

"I think we'll do pretty good, and I think as long as we stay and play as one, and make sure that we stay confident in each other, then we'll upset a lot of teams that think they can just write right over us," Smith said.

As for the Lions, scoring was never going to be much of an issue with Mason McKnatt in tow.

The senior hit 2,000 points as a junior and has been lauded as being one of the best all-around shooters in the mid-state.

After making the region tournament last season out of District 7, the Lions struggled in their first year in D-II. But Mason McKnatt says it's still been worth the bump up in competition.

"It's been different, I guess, physically," Mason McKnatt said. "We're not as big as other teams, and just speed-wise, but I feel like we've held our own for the most part. And it's been fun competing in D-II."

The leap for the Lions was substantial: they're not used to going up against powerhouses like Christ Presbyterian Academy or against an SEC commit like Webb Bell Buckle's Keon Johnson (committed to Tennessee).

"If you look at Webb Bell Buckle, they have two D-I basketball players, and then BGA, they have a few D-I football players (on their basketball team), and CPA is always good, so I guess we kind of knew going into it it was going to be a challenge for us," Mason McKnatt said. "I feel like we wanted to accept the challenge."

It was a tough outing for the team, but Mason McKnatt shared what fueled them to keep competing.

"All our teammates love each other, and the coaches love us to death," Mason McKnatt said. "We just want to play for each other."

McKnatt's dad Len is the head coach of the team and GCA's athletic director.

He shared his confidence in the school's move to D-II competition.

"I feel like this is where we need to be," Len McKnatt said. "I feel like the mission of our school is a lot closer with most of our opponents in the district and region.

"We had great opponents, obviously, in our other district, but I think it was a welcomed challenge for our coaches, for our kids. We love the teams in our [new] district. There are a lot of great schools, a lot of great coaches and a lot of great players and communities, and it's been really refreshing.

He cites the volleyball and girls soccer teams as two that finished in the upper half of their competitive pools.

"I think our kids have risen to the challenge," Len McKnatt said. "They're starting to kind of figure it out, what it's going to take to win a game."

The elder McKnatt spent time with BGA as its boys basketball coach, winning a state title in 2014. That's a school steeped in tradition. With GCA, it's all about forging a new path.

"Coming from somewhere that's been around since 1889 and then coming somewhere like Grace where...everything is a first, it's just awesome to see stuff growing and developing and how God's blessing our school," he said. "I think it's an exciting time for our kids and our families and our coaches."

For the future, McLeod thinks that it'll take a new gear of preparedness for GCA to make its mark in the new division.

"These first couple years, hopefully our student-athletes and all of our coaches, we learn that it's going to take a new level of training, extra time in the gym getting shots up for basketball players," McLeod said, "it's going to take a lot more work outside of our practice time to compete in this district. And, playing basketball outside of your school season, too.

"I think, if we can start doing that, and people start working harder a little bit outside of our practice time, I think we're going to be able to compete."

"We've had our tough moments, but God has blessed our school," Len McKnatt said. "We're growing, and it's exciting."