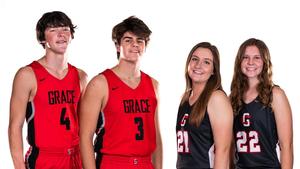 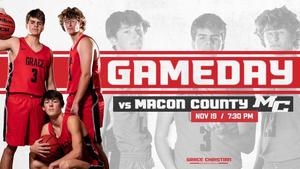 It has been a long 9 months since last taking the court and a lot has changed, however, it is finally gameday for the Grace Christian Academy Boys and Girls Basketball Teams. Both teams open the season tonight at home against Macon County High School. Girls will tip off at 6:00 PM and Boys will immediately follow at 7:30 PM. Click this post to read the rest of the article at gcaathletics.com.
On the boys side, GCA will be playing this season in honor of Grant Solomon. Grant was a huge part of the Boys Basketball program and will be missed tremendously. GCA will also be looking to replace the points lost by current Trevecca Nazarine University Freshman, Mason McKnatt. The Lions will be led by Seniors Will Beasley and Ashton Kelley.

Our opponent, Macon County HS, opened the season with a 10 point loss to Clarkrange HS on Tuesday night. They were led in scoring by Connor Johnson (21 points) and Kenny Wilder (17 points).

On the girls side, this will be their first season with Coach Michael Couey leading the Lions. Tony McLeod left to become the Head Coach at Father Ryan earlier this summer. Coach Michael Couey has great experience and is a great addition to the GCA family. The Lady Lions will be led by Seniors Carlie Mason and Averi Thorne.

The Macon County HS girls opened their season with a 59-46 win over Clarkrange HS. They were led in scoring by MTSU-signee Jalynn Gregory (32 points) and Saranda Woodson (10 points).

If you are unable to attend tonight's contest, you can live-stream the games on YouTube at this link.
http://gcaathletics.com Source: GCA Athletics